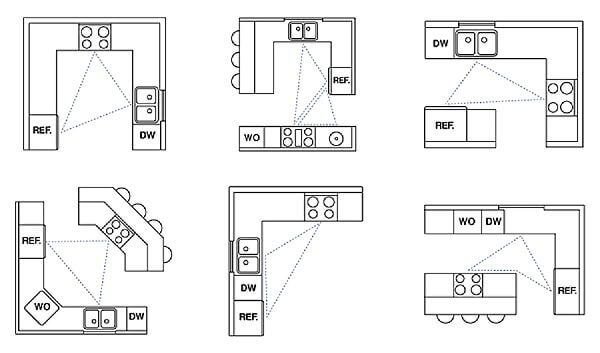 THINKING OUTSIDE THE KITCHEN TRIANGLE

A well designed kitchen is a ‘must have’ for any contemporary home. Whether you’re a single young professional or a large family, the design and layout needs to deliver just the right solution for your lifestyle. But what exactly is a well-designed kitchen?

Enter the Golden Triangle principle, a popular design tool that architects and kitchen designers have relied on for many decades to create the perfect kitchen layout for our modern homes. It was originally developed in the 1940s by the Illinois School of Architecture as a way to streamline workspace efficiency for the 3 fundamental tasks performed in the kitchen: cooking, food preparation and food storage.

The idea is beautifully simple. Arrange the cooker/oven, the sink area and the fridge in a triangle formation and you’ll always have everything in just the right place, reducing the distance and effort needed to work efficiently in the kitchen. Position the 3 key appliances close enough together so they aid your workflow, but not too close to make each of the work centres feel cramped.

Of course, a lot has changed since the early post-war years when modern domestic kitchen design centred around some fundamental assumptions, many of which have since changed beyond recognition.

Domestic building design
Kitchens were thought of as purely functional spaces and built as separate rooms, distinct from the rest of the house. With space at a premium in many post-war homes, kitchens tended to be a lot smaller than they are now. The generously spaced hub of the home we know today, complete with kitchen/diner or open plan designs is a relatively recent development.

Social change
Take a closer look and you’ll find that our modern lifestyles have little in common with traditional social conventions back in the 1950s. While the kitchen work triangle was very much designed around the needs of one cook (e.g. stay-at-home mum), kitchens these days have to satisfy the demands of several users, new cuisines, different food preparation methods and changed eating patterns.

Kitchen technology
From the early beginnings of domestic appliances – expensive, bulky and basic by our 21st century standards – technological development has been rapid. Contemporary kitchens now boast a wide range of state-of-the-art devices that include induction hobs, microwave ovens, dishwashers and fridge freezers etc., which previous generations could only dream of.

Beyond the kitchen triangle

Given the enormous changes experienced in the way that we now use our kitchens, it’s not surprising to see that the kitchen work triangle is no longer the only guiding principle in kitchen design. Of course, you can’t argue with the logic of ergonomic design principles – and they are still the most important tool when it comes to maximise space and efficiency in space challenged kitchens. However, professional kitchen designers these days also make use of alternative layout options that are worthy of consideration.

Work zones
While the general idea of the kitchen work triangle is to keep the distance between the key areas of sink, cooker and fridge within 2 to 3 steps, you can adapt the principle to work for large contemporary kitchen spaces.

Create spacious but distinct work zones for food storage, food preparation and cooking activities, then maintain their logical relationship as per the work triangle, but adjust the distance according to the room’s scale.

Open concept
Define the boundary to your open plan kitchen with an island that can be used from both sides but for different purposes. Place the fridge at the entrance to your inner kitchen area, so it can be accessed by others without getting in the way of the cook. That way, the work triangle can still govern the layout of the kitchen, while making it feel as part of a wider living space.

Integrated kitchen/diner
Combining kitchen and dining into one concept rather than having separate areas is practical, modern and stylish. Whether you elongate the countertop to include a breakfast bar area, or add an extra wide island that can multitask as worktop as well as dining table, you can still use the work triangle principle – just tweak it a little to bring it up to date.

Galley
Arranged as 2 parallel counters with a central aisle, galley style kitchens are a popular design for small spaces. Offsetting the sink and cooker can make it easier for 2 people to use the kitchen at the same time, while maximising light and storage is key. Instead of wall units and closed door cabinets, opt for open shelving for ease of access.

Pullman
Taking its inspiration from the layout of old train compartments, a Pullman style kitchen consists of a single run of kitchen units and appliances, with all workspaces arranged along one wall.

The design is common in European apartments where space is at a premium. Although it doesn’t follow the traditional Golden Triangle rules, there’s no reason for the design not to be efficient, as long as the work centres are arranged in the right sequence: food storage, preparation, cooking.

Kitchen Ideas
Share:
Warning: count(): Parameter must be an array or an object that implements Countable in /homepages/25/d374745219/htdocs/PrestigeKitchens/wp-includes/class-wp-comment-query.php on line 405

Prestige Quality Kitchens is part of a family run business established in 1986. We are here to turn your dream kitchen into a reality so please visit our showrooms or phone in and we will be delighted to help.